Bet You Haven’t Tried All of These 8 Exotic Colombian Fruits! 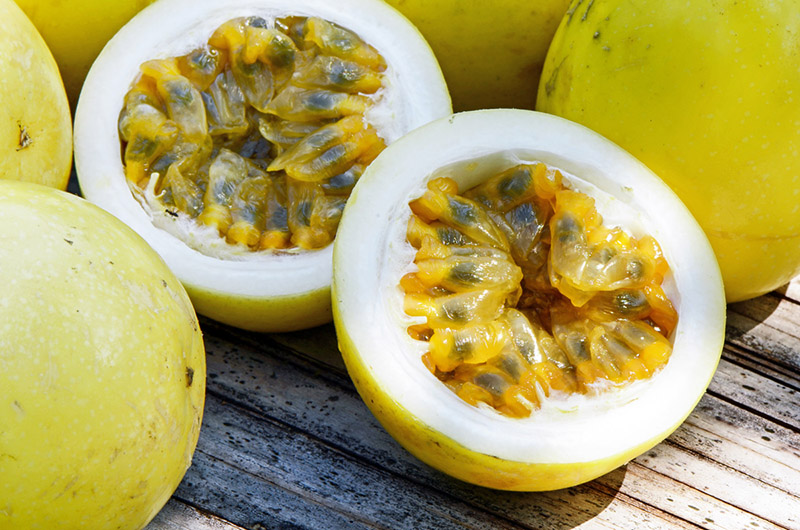 Going to a market in Colombia is like one big guessing game. Touring Colombia, you’ll find markets stacked high with a colourful array of home-grown fruits and vegetables. Colombia might have its modern cities such as Bogotá and Medellin but it’s a country that’s ultimately ‘campesino’ at heart and, in the markets above all, it shows.

There’s something delightfully child-like about trying a food for the very first time and, since moving to Colombia, I’ve found at least 15 fruits that are completely new to me. With the help of two friends travelling Colombia, Erin from the United States, and Nelson from Ecuador, here’s our list of the eight craziest colombian fruits on the market!

So, that bright orange, Christmas bauble-shaped fruit? It’s called a granadilla (‘gran-a-dee-ya’). Its smooth, thin, plastic-like skin cracks open and inside is a clear goo full of black, crunchy seeds ensconced in a spongy white pith. The goo is usually sucked up and eaten whole, seeds and all, like a passion fruit. Deliciously sweet, perhaps closest in taste to white grape pulp, the granadilla grows in tropical regions, hanging from vines like bunches of grapes.

“The inside looks like mushed up alien brains,” says Erin. I can’t vouch for that but it looks akin to frogspawn to me. Going by its insides, it should taste horrible but…it’s delicious.  Really sweet and tangy. Definitely a favourite all round.

In Cali, the Caleños love a ‘lulada’, where the lulo juice is served ice-cold with big chunks of lulo fruit in it. If you’re in a bar, ask for a ‘lulada envenenada’ – the traditional lulado but spiked with a shot of Colombia’s favourite sugarcane spirit, aguardiente!

MARACUYÁ – Hint: In english it’s the name of one of Drake´s hit songs.

Yep, that’s right – Maracuyá means passion fruit in spanish. If you don’t know who Drake is and you’ve never heard his song Passion Fruit…you’ve been missing out on a great fruit and music. Maracuyá has a thick, yellow, plasticky skin that’s usually shrunken and wrinkled, making it look past its best. Yet, as a kindly maracuyá grower in the market advised me, don’t judge this one by its cover. Instead you feel its weight: the heavier maracuyás are the juiciest, regardless of the wrinkly skin. Cut open, the goopy orange flesh is full of black seeds. The goop is scooped out with a spoon like a passion fruit, and the taste is even more acidic and sour than the lulo. “Wow, this one’s like a warhead!” says Erin, inexplicably. Warheads, it turns out, are super sour sweets in the States made of citric and malic acid that make your mouth water and jaw clench up. Sour-sweet to the point of artificial, it reminds me of a vitamin C tablet or the sour ‘cola bottle’ jelly sweets I loved as a kid. This fruit is another ‘just for juice’ fruit and its acidic kick makes it really refreshing with lots of ice.

This fruit at least resembles something we have back home – a cross between a raspberry, blackberry and maybe mulberry. The mora flesh and seeds are tougher than both raspberries and blackberries and the taste is really tart. Mora berries here are often whizzed into a fruit juice with milk or made into ice-lollies. They are also cooked up with cinnamon and panela – a traditional, less processed type of brown sugar that’s sold in large blocks in Colombia and Ecuador – for a jammy sort of dessert.

The name translates as ‘tree tomato’ and it’s a pretty good description for this delicious fruit – one of my favourites. Elliptical in shape and with a smooth, orangey-maroon marbled skin, the tree tomato can be cut in half and flesh scooped out like a hard-boiled egg. The flesh resembles a tomato with the colour of a cantaloupe melon. Sweet and tangy, there’s a definite aftertaste of green tomato and it’s deliciously more-ish, especially as a juice. 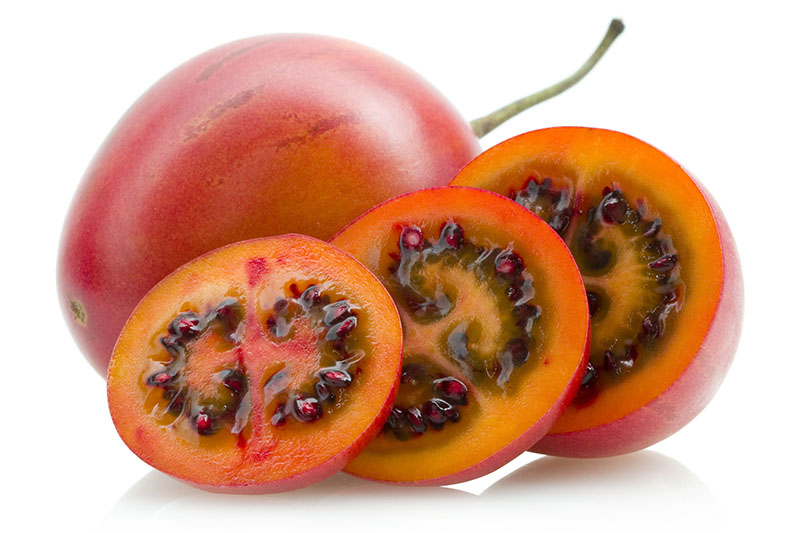 A stand-out local favourite in cities such as Cali and Buenaventura is a bright orange palm fruit called chontaduro, typically found growing along the Pacific coast. You can’t walk more than a few blocks in Cali’s city centre without coming across a chontaduro lady. She’ll be sat on a plastic stool on a street corner with a mighty aluminium bowl before her, deftly peeling one after another of these colourful plum-sized palm fruits, all ready to eat with a little salt and honey.

Chontaduros may look like apricots but don’t be expecting something sweet and juicy: they’re drier than they look and probably closer to a potato or yucca in texture and flavour. But chontaduros are nutritional energy bombs – and, legend has it, nature’s aphrodisiac, too. Few people experience ‘love at first bite’ with a chontaduro but, with a little perseverance, they can become surprisingly addictive! A bag of four chontaduros will typically set you back $2,000 pesos, smothered with honey and a sprinkle of salt. 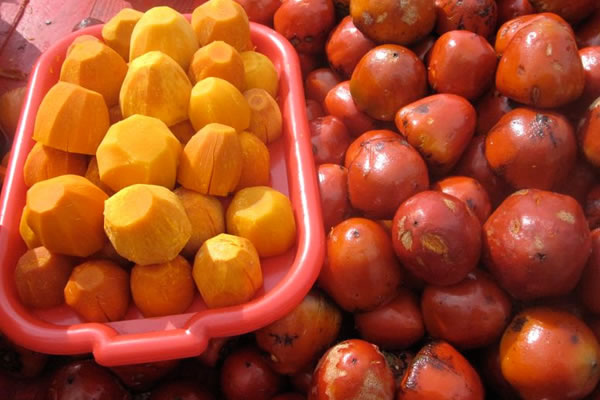 The Guanabana, pronounced Wah-na-bah-na, is not only the most tricky of colombian fruits for foreigners to pronounce, but also the most interesting tasting and looking. It is a giant, green, spiky fruit that can grow to the size of a football. It grows directly out of the trunk of its tree and each can weigh several pounds. Cut this soft fruit open and you’ll find white, squelchy flesh covering shiny black seeds. “This looks like the flesh of a raw fish?!” says Erin, shaking her head. “It’s gonna taste gross.” Except it doesn’t. Tasting it for the first time, many people say that it tastes like a fusion of pineapple, strawberry and orange. In my humble opinion, it takes exactly like a stick of Juicy Fruit bubblegum.  Although it is absolutely delicious to eat on it’s own, Colombians often whizz it up into a tasty juice (with water or milk). For those with a sweet tooth, try a guanabana popsicle or mouthwatering guanabana ice. 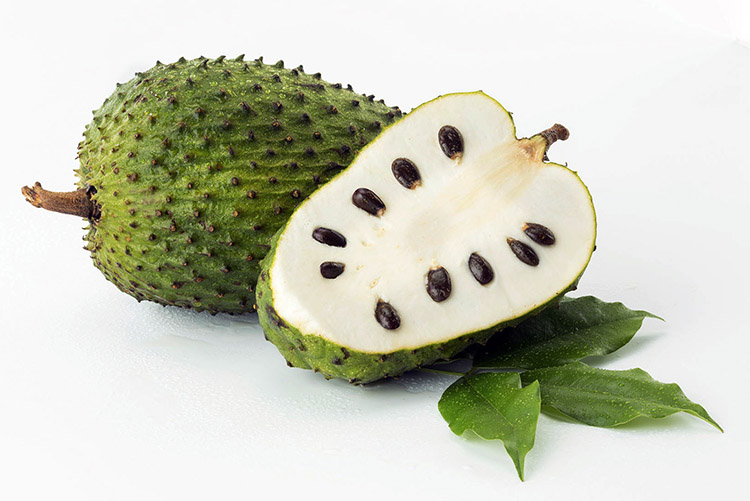 When I first heard of ‘guama’, I assumed it was the Spanish word for ‘guava’ but, nope, ‘nada que ver’ (nothing like it)! Shaped like a monster green runner bean – some can be over half a metre in length! – the guama’s shiny black beans are covered in a sweet, furry pulp that can be eaten. It’s the furry pulp that gives the guama its nickname as the ‘cotton candy bean’ and its sweetness that gives it a second moniker as ‘the ice-cream bean’. If that all sounds a bit ‘Jack and the Beanstalk’ fairytale-like to you, ask around in the markets and see if you can crack open one of these mighty legumes to try for yourself!

Of course, this is just a taster, so to speak! There are many other exotic Colombian fruits like Zapote, borojó, and pomarosa that can be added to this list. As you traveling around Colombia, keep an eye out for other more exotic fruit wonders. What fruits have you been game enough to sample? Share your fruity favourites with us below and we’ll add them to our list.