Caño Cristales Colombia: The 8th Wonder of the World? 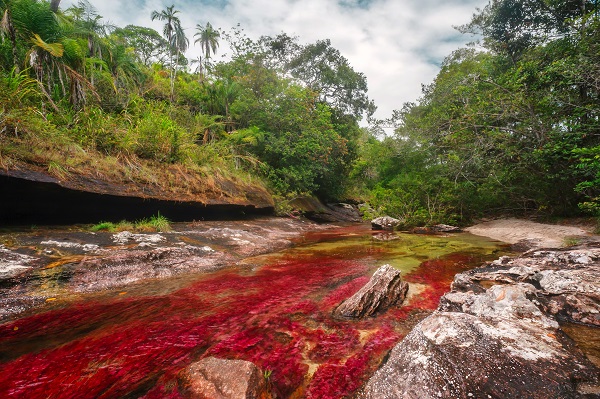 Deep in the Sierra de la Macarena mountain range in the wilderness of Meta, Colombia lies a hidden place where magic still exists. Rare and bountiful wildlife populate an incredibly diverse ecosystem that, for a few months out of the year, gives rise to one of the most fascinating natural wonders on Earth – the Caño Cristales liquid rainbow.

According to native legends, the Caño Cristales river escaped from paradise to wander among the mountains and prairies that make up this incredible region of South America. It has been called the rainbow river, the river of five colors, and a natural wonder of the world. Keep reading to discover the magic of this remote and unique destination in Colombia.

What Makes the Caño Cristales River so Unique?

From December through May, this river is mostly ordinary, albeit composed of interesting rock formations and deep hidden pools. In June, it transforms into a shocking riot of vibrant colors – red, green, blue, yellow, and black. This incredible metamorphosis remains through late November and, although it may seem like magic, it actually takes place because of a combination of algae, mineral deposits, and the presence of the endemic plant species Macarenia clavígera.

This flowering water plant is incredibly rare, growing only in a few tropical climates of the world. Caño Cristales is the only place where it blooms so prolifically and spectacularly.

Only recently reopened to public tourism, the river long remained a mythical and forbidden mystery, mostly unknown to the public before it became prohibited to go there in the 1980s. Now it is slowly becoming known as one of the natural wonders of the world as more and more visitors reveal stunning photos of the river of five colors.

Known as the Serranía de la Macarena, this mountain range and Colombian national park is so remote that you’ll need at least four or five days to travel there and fully enjoy its marvels. This area is one of the most biodiverse ecosystems on the planet. Made up of a strange amalgamation of large-scale grasslands, mountains, jungles, and waterways, an incredibly diverse multitude of animals and plants make their home here. The Serrania de la Macarena is home to jaguars, cougars, anteaters, eight different kinds of monkey, 550 species of birds, 1,200 species of insects, 100 species of reptiles, 50 different species of orchid flower, as well as an amazing array of plantlife.

When you’re not staring drop-jawed at the incredible Cano Cristales river, you can enjoy one of many different tours that are offered to explore this region and its range of flora and fauna.

What is the History of the Caño Cristales and Serranía de la Macarena?

Many have asked us “Who discovered Caño Cristales?” Technically, the river has been known to indigenous locals for ages, but it was not discovered by modern society until 1969, when a group of Colombian cattle farmers stumbled across the river in full bloom.

At the time, no airports were located anywhere near the region, making the journey a long and hazardous trek through the wilderness that only the most adventurous travelers would dare to take. The miraculous rainbow river remained a little-known gem hidden deep in the Colombian wilderness until guerilla groups commandeered the tiny village of Macarena, transforming it into a dangerous headquarters for militant activity and cocaine production.

Throughout the following years, the Colombian national army sought out the guerilla hideout and the battles that followed turned the entire area into a virtual war zone. Tourist activity in the Serranía de la Macarena was totally prohibited in the late 1980s for safety reasons and remained so until 2002, but since air travel was not widely available in the region until 2009, it did not become a popular tourist destination until recent years.

Unfortunately, the militant activity created a lot of damage to the delicate ecosystem and gave the region a dangerous reputation that still gives tourists caution. Be assured that the areas surrounding Caño Cristales and the national park are considered very safe due to the presence of constant military and police patrols. The officials are not just there to protect tourists, however; they are also present to protect the land.

The Colombian government is determined to protect the ecosystem and has implemented various regulations to monitor and control tourism. Keep reading for a few tips you’ll need to know before visiting Cano Cristales, the most beautiful river in the world.

How to Get to Caño Cristales

To access the river of five colors, you’ll have to fly. The fastest and most reliable route is to travel to Bogota and book one of their direct flights to the village of Macarena. It is recommended to spend two or three full days in this pueblito to fully enjoy all that the Serranía de la Macarena has to offer. There are several hotels in the immediate area of Macarena.

From there, you’ll need to book a guided tour to see the river. This leg of the journey involves riding in jeeps and canoes until you arrive at the most picturesque areas of the river. A tour guide is required by law in order to protect the fragile biodiversity of this national park in Colombia. If you book through an agency like Palenque Tours, the guide and tour will be included in the price of your trip. We will also take care some of the trickier details below.

Things You Need to Know Before Traveling to Caño Cristales Colombia

Due to the remoteness of the area and the host of regulations that surround Caño Cristales tourism, you’ll want to prepare beforehand:

Other Attractions Near Cano Cristales

Although the river will be the main event, don’t forget to take advantage of the other amazing things to see in the Serrania de la Macarena:

It’s your turn to become part of the magic. Discover the eighth wonder of the world when you book a trip with Palenque Tours to visit the Caño Cristales river in Colombia’s Serranía de la Macarena national park.

Have you visited this or any other must see places in Colombia? Share your experience in the comment section below.

If you loved this article, be sure to let your friends know by using one of the social sharing buttons on this page.